THE EVOLUTION OF THE OBJECT

Everything we do is connected to what we’ve done before. History is not a sin but a necessity for our development, our evolution.

With this in mind, the course The Evolution of the Object in the department of product design at the HBKsaar, investigated the traditional form language of typical objects produced in the ancient Greece. During the 16 weeks, students engaged in a tight dialog between the past and the present, transforming the experienced terminology of shapes and material into new narrations and objects.

The historical research included a trip to Berlin, visiting both the Altes Museum and Neues Museum. Studies were made on material, function and aesthetics, as well as on the layouts of archival presentations. We translated the most common shapes found in ancient Greece, such as the amphora and the stamnos, into quick brown cardboard paper models, for an immediate grapple of the subject. Before using the 3D porcelain printer in the second step of the project, further abstractions on the shapes of the original objects were made. These design transformations were necessary to match with the digital codes of the computer program as well as the material properties of porcelain. In the third part of the project each student embarked on their own path, translating the influences into a self-determined project. This book summarizes the journey, from the early encounters to the final objects. 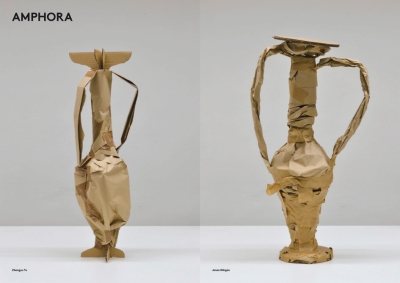 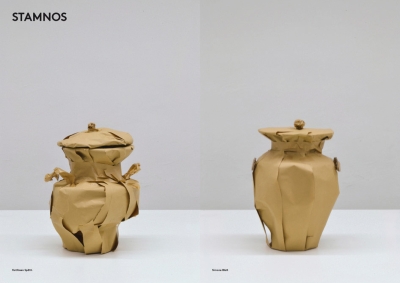 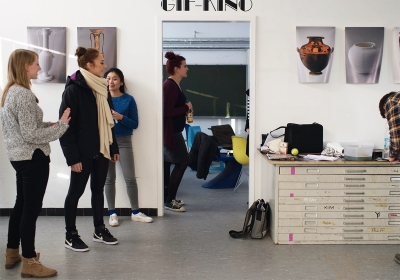 THE EVOLUTION OF THE OBJECT, Overview, setting up the exhibition, Atelierprojekt 2014/15 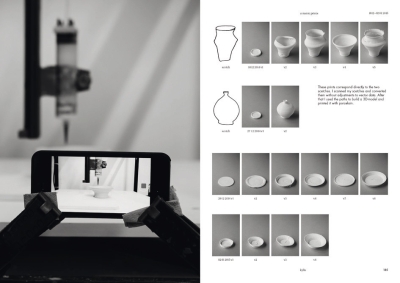